I have recently received some fascinating communications in response to my previous “Iron Genie” and “Ingenious Drawing Machines” posts, which the authors have very kindly given me permission to share in the current post. I would like to start by thanking Roma and Ray Henville, for their generous contributions of stories and photographs.

The featured image is one of a series of photographs of a portable geometric chuck sent by Roma, who is a collector and curator of the online Geararium Museum of Gears. This little gem does work, and you can see it in action here. It is made of brass, dismantles and packs up in its own mahogany box, and is dated somewhere between the 1850s and 1880s. It was discovered in the United States.

Roma sent me the following comments about this device: ” I think it is hand-made by a Victorian inventor. Too bad they did not leave any initials… couple of things I don’t understand – why are there two drawing platforms on it, and what would be the proper name for this machine?”

“I am fascinated by the mind of the inventor who made this device. If you look at the bottom of the machine, you can see the markings from cutting and polishing the parts. Notice that some of the gears could be attached and detached easily with the help of small levers. I guess all of those gears and different attachments affect the final drawings. There is a small word on one of the knobs saying ‘Wheel’. Unless this is the name of the inventor, for example James W. Wheel, this is just a wheel!”

I asked Roma what motivated him to start collecting gears and historical geared objects. Visiting museums with his mother in his youth, Roma was drawn to the mechanical objects,  and had the idea of creating “… a small museum dedicated to gears or wheels with teeth, and objects related to them… I am excited to discover old gears with interesting designs, or an object with exposed gears in its mechanism. An object with a mechanical part is now turned into an art object. Discovering and collecting is exciting, but it is also exciting to share the finds with people around the world. Maybe somebody else will find inspiration browsing the items in the museum.”
I certainly find Geararium inspiring, and I was also fascinated to learn that Roma is in the process of creating some wacky machines of his own.

Ray Henville has been restoring a geared harmonograph that he acquired in a state of disrepair: ” I am in the process of restoring/reconfiguring a harmonograph made by Mr. John Austin of Detling in Kent. I believe John Austin was born in Geelong, Australia, and his family bought Glastonbury Abbey House in Somerset. In 1958 his niece who lived in the Abbey House gave the remains of the harmonograph, together with a book of designs made on the machine, to her gardener’s teenage son. At that time, the remaining parts of the machine were mounted on its baseboard. About half of the machine was missing, but fortunately the gardener’s son took a photograph of the machine as it was at the time.

Over the years the mahogany baseboard was used for some other purpose, and eventually, c. 1990, the dismounted brass mechanisms were sold to a friend of mine at a car boot sale, together with the book of diagrams. My friend died not long afterwards, and I bought the remains of the machine from his estate.

Restoration of the harmonograph. Image copyright of Ray Henville 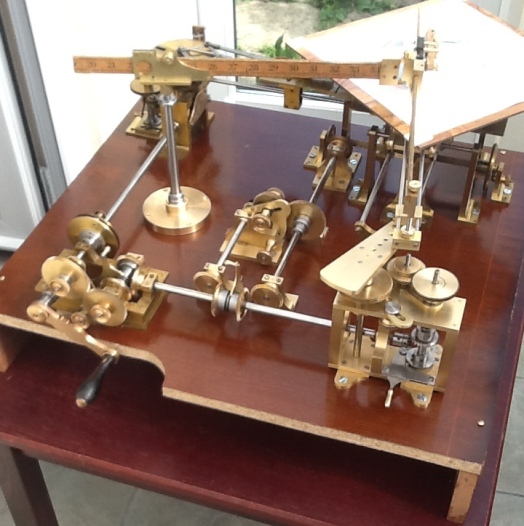 The drawings made by the machine were on fairly small pieces of card about 4″ square, and larger drawings were produced by enlarging figures made on glass slides. I have reconfigured the machine to produce diagrams up to 12″ square. Mr. Austin was an amateur photographer, and I feel sure that he must have taken a photograph of the machine in its complete state. If  such a photograph was to turn up it would be possible to rebuild the machine in its original state. In the meantime, I have gone some way to completing the machine so that it can be used, but it is still very much an ongoing project. The photos will give you some idea of progress made to date. By the way, the baseboard is 24″ by 27″.

Ray Henville’s restoration is impressive, and I wonder how many of the gears he had to re-fabricate in order to get it in working order. Ray also included some of the drawings, which I believe were the original ones in the album that came with the machine. They are most unusual, and very beautiful. 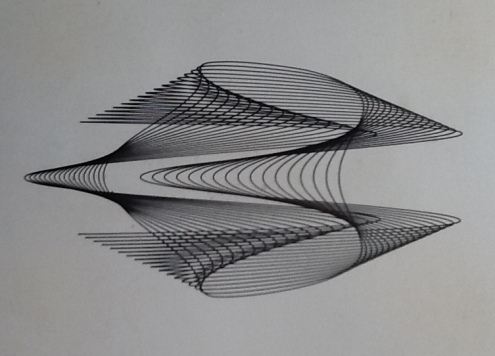