Exhibiting Manuscripts for a Prince of the Black Sheep at Oxford 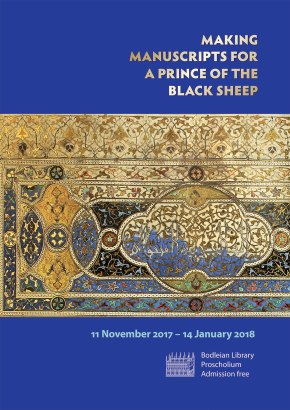 I have curated a display of 15th century illuminated manuscripts at the Bodleian Library, Oxford, which will be open free to the public until the 13th January 2018. It is called “Making Manuscripts for a Prince of the Black Sheep”, based on my research as a visiting fellow at the library. You can find out more in the Bodleian Libraries Listings Page. There is also my dedicated blog about the manuscripts, Making Masterpieces for a Prince of the Black Sheep.

There are five manuscripts in the group I studied, all made between 1456 and 1460 in Shiraz for Prince Pir Budaq, who belonged to a Turkmen clan known as the Qara Qoyunlu or “Black Sheep”. They were warriors, and Pir Budaq was no exception. He also loved books and poetry, and in the short period of his regency at Shiraz for his father, the King of the Black Sheep Jahan Shah, he patronized the production of the most exquisite illuminated manuscripts. 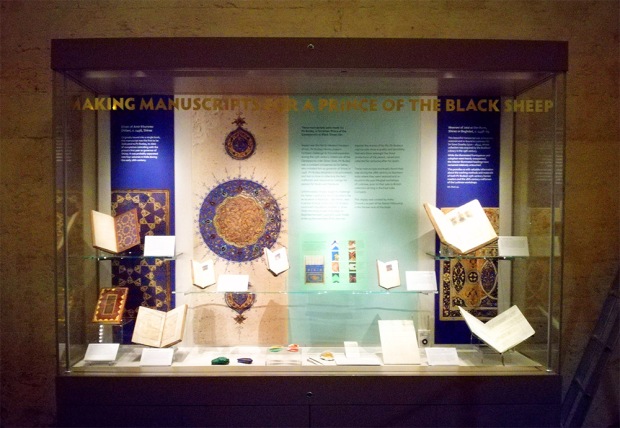 The brilliant exhibitions team at the Bodleian have designed the display for me, with stunning graphics showing magnified images of some of the beautiful work in the manuscripts. The designer used rich royal blue and pale green backgrounds for the graphics to reflect the principal colours used in the manuscript illuminations.

My study of the manuscripts was all about the way they were made and the materials and methods that were used to make them – an area of research known as codicology (after codex, the name for a bound book with pages sewn together, as opposed to a scroll, for example). 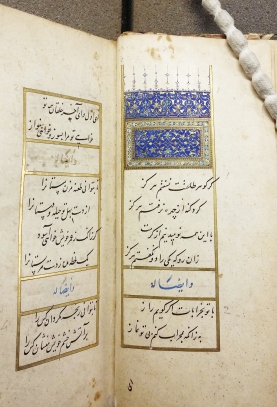 I started my investigations with two of the Bodleian Library’s designated treasures, a magnificent copy of the Masnavi of Jalal al-Din Rumi, and possibly the first ever illuminated copy of Omar Khayyam’s Ruba’iyat, which was made in 1460, five-hundred-and-fifty years ago. It was a huge privilege to be allowed to handle such a precious treasure.

It is surprisingly small, measuring about six-and-a-half by three inches. Designed to be easily held in the hand or carried in a pocket, this format was known as safina. You sometimes see Persian miniatures of courtly lovers in a garden, with a flask of wine, and a safina of poetry.

The Persian nasta’liq calligraphy, the paper, the ruled lines and the illumination in this book are utterly exquisite, done mostly in gold and the finest quality of lapis lazuli blue.

I discovered two more similar manuscripts, evidently made as a set with the Omar Khayyam, so I called this set “The Three Brothers”.

The titles are quite an unusual choice for the period, and might reflect the Prince’s Shi’a leanings. Nizari for example was a 13th century poet who belonged to a sect of Ismailis famous for their secret service and castle forts at Alamut. They had a reputation for carrying out stealth assassinations, but  were also heavily persecuted by previous dynasties, and their strongholds were destroyed by the Mongols.

The illuminations are incredibly delicate, and very similar in visual language to another beautiful Pir Budaq manuscript at the British Library, which I have written about in a previous post.

I took a look at one of these small manuscripts under a microscope at the Bodleian’s Heritage Science department, so as to get a closer understanding of the colours. We got some stunning images.

The principal colours used in the manuscript were Lapis Lazuli Blue, Malachite Green, Red Lead and White Lead. There are also some unusual colours, including Vergaut – a mixture of Indigo and Orpiment, a very coppery, dull red-gold, silver and an orange organic colour which we cannot identify. 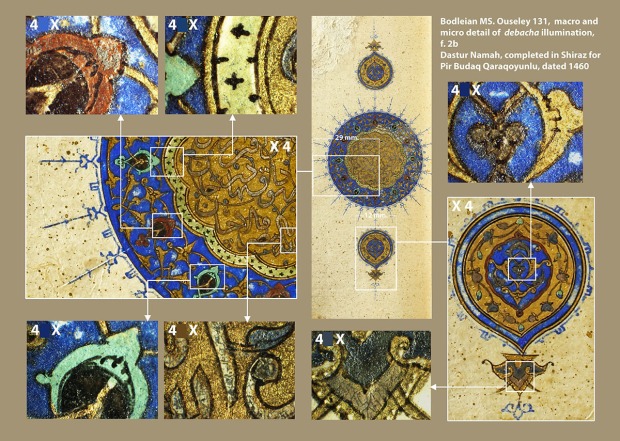 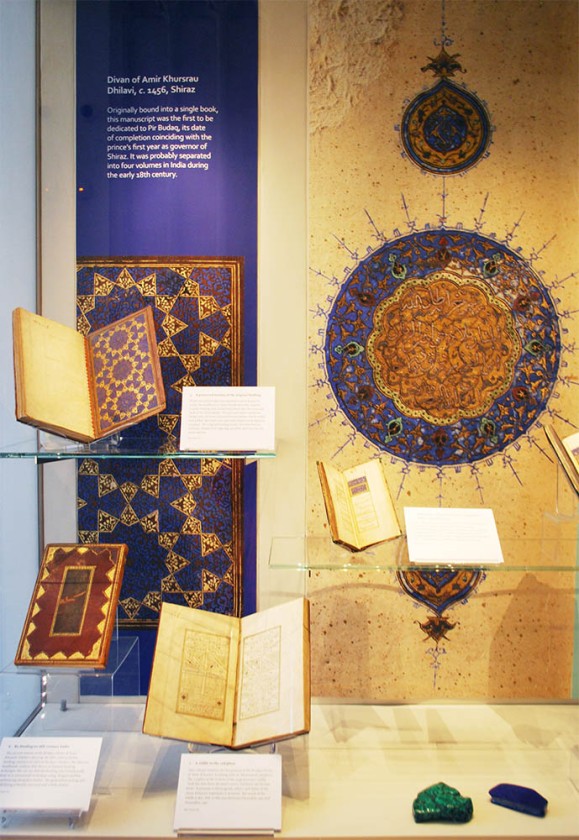 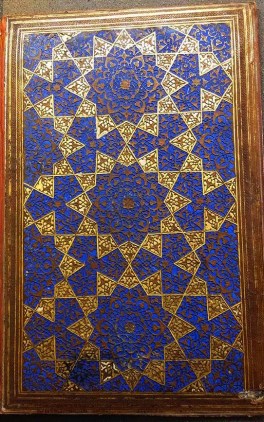 A preserved inner board of the original binding.

Another manuscript is a Divan of Amir Khusrau Dhilavi, split in to four volumes when it was restored in India in the 18th century. The restorers preserved the decorated inner boards of the original 15th century binding, pasting them into the first volume. Nobody in the library had ever seen these before, so it was a wonderful surprise to myself and the Bodleian staff who were supporting the research.

Fine brown leather has been cut and stamped into a delicate geometric filigree, and laid over pasteboard heavily coated with lapis lazuli pigment, with gold details. The workmanship is incredibly fine.

The last manuscript on display is another of the Bodleian’s treasures, the Masnavi of Jalal al-Din Rumi, a large and lavish book that has been exhibited many times in its history.

The opening pages and the colophon had been heavily overpainted in the 18th century in India. Below is a detail of the first page, with a Shamsa or sunburst design containing a dedication to Pir Budaq. You can see the overpainting in the bright green that has been used to touch up details, for example. 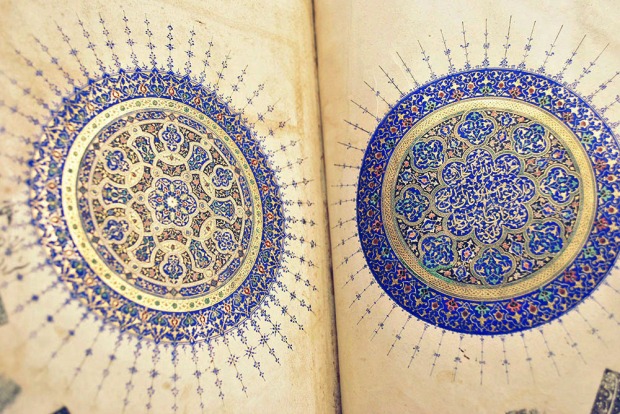 However, this manuscript also contains hidden interior pages with stunning illuminations that have never been restored, and very rarely seen. I decided to exhibit it open at one of these pages. 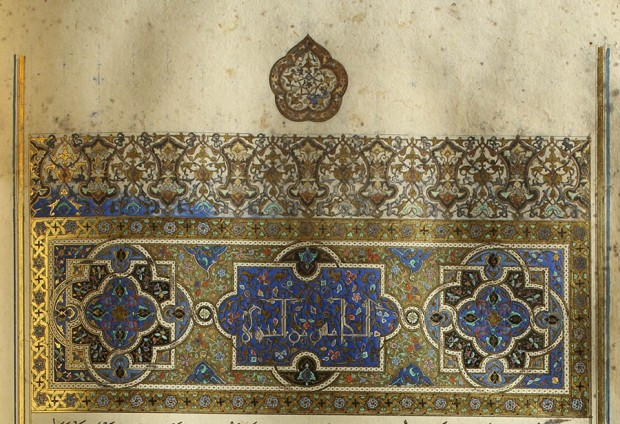 We have also used one of the interior illuminations in all the Bodleian publicity images. There is so much to learn from examining these beautiful 15th century headings, particularly as heavy water damage during the manuscript’s history has washed away a lot of the colour, leaving only the original drawings in black and gold ink.

I used the opportunity to try to understand and analyze the way the designs were constructed, and the grammar of elements in the illuminators’ repertoire at this period. We have included in the exhibition some pages in my research sketchbook to show this process. 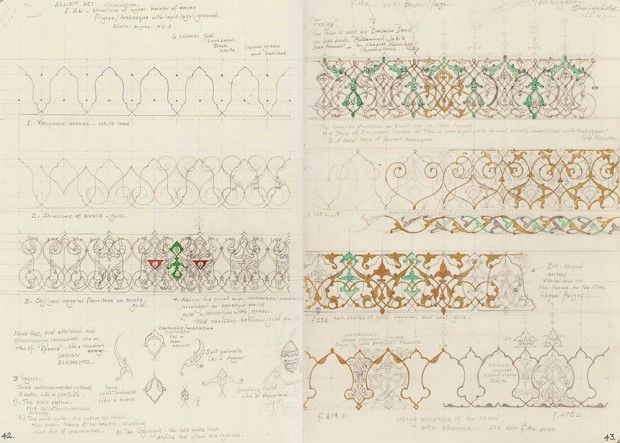 The exhibition is situated in the Bodleian’s Old Library quadrangle, which is in itself a wonderful place to visit. This is the location where several scenes from Harry Potter were shot, so you can imagine how magical the whole experience has been! 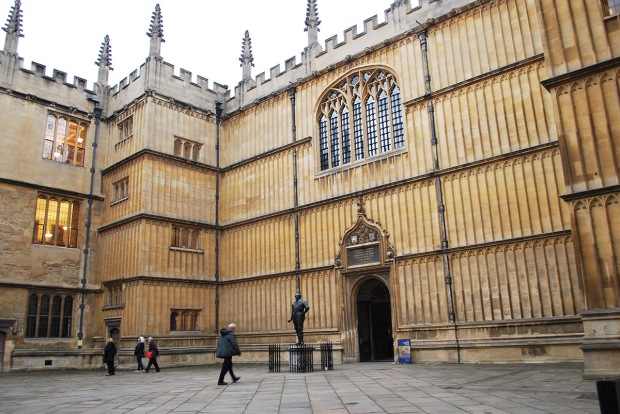 ← Euroart Studios and its founder Lorraine Clarke
My Story: Learning Painting from a Rajput Master →